How to Repair Your Online Reputation After a Mistake

How to Repair Your Online Reputation After a Mistake

It happens to the best of us: we make mistakes.

Online, mistakes are amplified. A rouge tweet or blog post with a typo can travel faster than you can hit the delete button; not that it matters anyway, since the more popular your brand, the more people who will have screenshots of the incriminating incident.

The good news? In the blink of an eye, the Internet's short attention span will move on to the next fiasco. All may not be forgiven, but it certainly will be forgotten, at least by the general public. There's some bad news too, however: people make snap decisions, and one mistake can equate to a huge loss in revenue by angry customers before people forget. A big enough mistake means that they won't be back, so you can kiss any kind of recurring revenue goodbye.

The following steps are my recommendations for handling online mistakes that could damage your reputation:

Yes, I have a step zero, because online reputation damage control should start now. You're going to make mistakes online. When you do, have plans in place for how to handle these mistakes. This is especially important as your team grows, since you might not be reachable when a problem occurs. Make sure every employee knows how to handle tough situations.

Step 1: Identify the severity of the problem.

Some problems are funny or annoying, but won't do much reputation damage. For example, if you make a typo in one of your tweets, it's not the end of the world (unless you run an editing business maybe!), but if an angry employee posts a racist message on your Facebook page, this is a very big deal. The severity of the problem will help you determine how drastic your response should be.

Nothing is ever truly deleted from the Internet, but that doesn't mean you should let an offensive social update stay live, keep a factually incorrect post on your blog, or allow hackers to maintain control of whatever they've hacked. After identifying the problem, you next step has to be to stop the bleeding.

The first thing you say after any kind of problem needs to be an apology. Our basic human instinct is to defend ourselves, but any kind of defense can be easily seen as an unwillingness to admit the mistake. You can explain what happened, but always apologize first. Make sure that you are sincere.

One of the best examples of a good apology was recently posted by actor George Takei on Facebook: 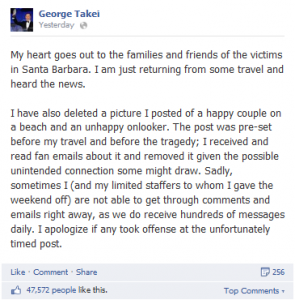 This message has almost 50,000 likes because he apologized, explained what happened, and focused on an extremely important issue, rather than focusing on defending himself. But be careful - too much explanation can make it seem like you don't care that others were offended by your mistake.

Who was most offended by your mistake? Who is spreading the word and rallying others against you? Who are your most valued upset customers? Reach out to those people privately and individually to apologize personally. In some cases, free products, discounts, or other perks might be appropriate.

Some people won't accept your apology. Some people are just trying to evoke a response. Don't feed the trolls. Debating will only continue to push the issue into the spotlight. Remember, most people will forget a mistake pretty quickly. If you stop engaging with people who are bringing it up, you can move forward.

What caused this problem in the first place? What can you do differently so it doesn't happen again? For example, was it an overly opinionated blog post that made people mad? Maybe your new policy is to have at least three people look at each post before it's published to ensure that it enhances your brand messages. Was a employee tweeting from your brand account when they meant to be tweeting from their personal account because they signed into the wrong account on their phone? Maybe your new policy is to get everyone on the social team a phone specifically for social updates from brand accounts.

Do what you can to avoid repeat problems. People will forgive you once, but they may not be able to look the other way if mistakes happen again and again.

About the Author: Allison Boyer is a content marketer who blogs regularly about blogging, email, social media, and more at AllisonBoyer.com.

View all posts by: Allison Boyer